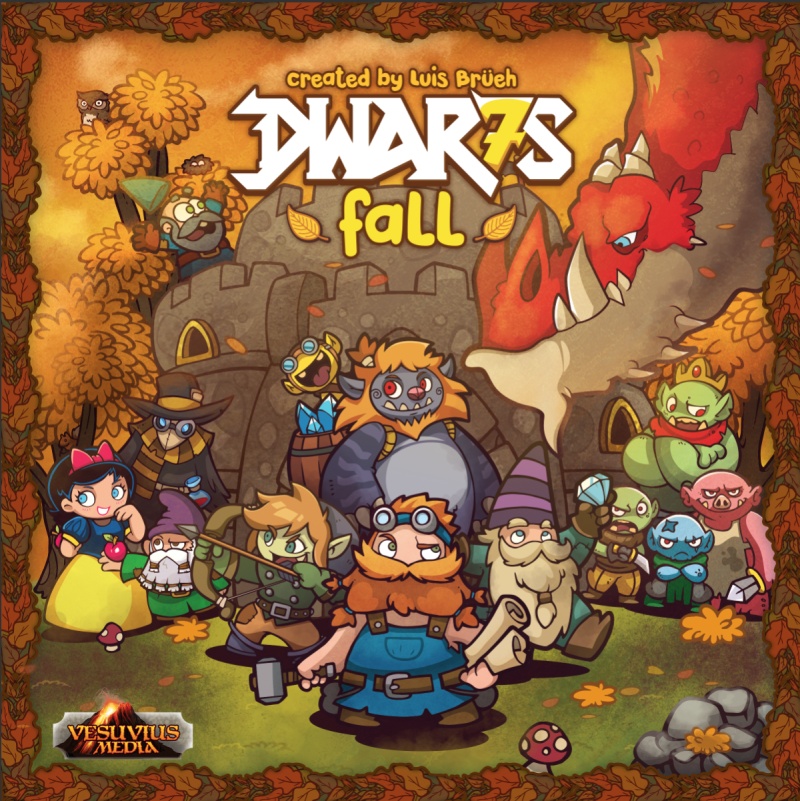 The Dwar7s Fall Collector's Edition includes the core game, the Royal Decrees Expansion, the Empires Expansion, a game board, and the new Troll's Bridge Expansion.

“If you thought Dwar7s Fall got competitive with ogre cards and the Royal Decrees, wait until you throw a moody troll into the mix,” said Konstantinos Manos, CEO of Vesuvius Media. “Anyone can play our Dwar7s games, there's no text on the cards and they're fun, with super cute illustrations; BUT, depending on how you play and who you play with, they can get aggressive!”

Designed and illustrated by Luis Brueh, Dwar7s Fall is a worker placement and hand management board game where players take on the role of Dwarf King and prepare their kingdom for the long and terrible winter. Players collect gems, build castles, stock food and defend against ogres, dragons and more. Dwar7s Fall is for 2 to 7 players, ages 13+, and plays in 45 to 60 minutes. The rule book is available in 8 languages and players can easily learn to play by watching The Card Board Stacker's 7-minute How to Play video.

“What's great about the Collector's Edition is that it fits the core game and all the expansions in one box. It will be the same size as Dwar7s Winter,” said Manos. “And, of course, you get an awesome new expansion that adds new elements to the game and a game board!”

The Dwar7s Fall Troll's Bridge Expansion is the latest addition to the game. In this expansion, a moody troll is unleashed, wrecking havoc on the kingdoms! The expansion includes 3 custom wooden meeples, 4 ogre cards, 1 Trolls Pond starting tile, 4 troll moods, 16 roaming troll cards, and all stretch goals unlocked during the new Kickstarter campaign.

In December 2016, Dwar7s Fall surpassed its crowdfunding goal with 1622 backers worldwide pledging $82,479 USD during a 3-week Kickstarter campaign. The game sold out at numerous conventions and has been picked up by distributors in Spain, Brazil, France, Russia, Greece, Poland, and China. Dwar7s Winter funded on Kickstarter in January 2018 with 1682 backers raising $118,563 USD.

The Dwar7s Fall Collector's Edition Kickstarter Campaign will run from Wednesday, October 10 to Monday, October 29, 2018 with a funding goal of $15,000 USD.

Dwar7s Fall and Dwar7s Winter are the first two games in the Dwar7s series. The third and forth games, Dwar7s Spring and Dwar7s Summer, are in-development. Each game in the series is played on its own; however, they connect thematically. Players follow the story and struggles of the dwarfs throughout the seasons.

After all four Dwar7s seasons are released, a new Dwar7s World Campaign will launch. In Dwar7s World (title subject to change), players will start as a dwarf worker and make their way through the seasons, gathering experience points (formerly known as victory points). Experience points will allow players to upgrade their dwarf character with the ultimate goal of being declared Dwarf King or Queen!